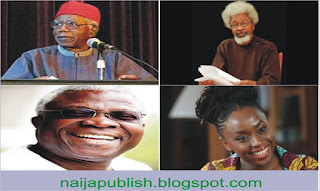 Nigeria has many literary giants (authors and writers) who have contributed to both Africa and global literary development. This article will x-ray the life and works of some of these great minds.

It will interest you to know that the selection criteria for this list of Nigerian authors are entirely the discretion of my perspective and hence this list is not exclusive. You can therefore utilize the comment box to share your views on this subject matter with the world.

Professor Wole Soyinka is a Nigerian Playwright and Poet. He is also a strong critic of successive Nigerian governments, especially during the military era.

It will interest you to know that he was the first African recipient of the "Nobel Prize in Literature", which was awarded to him in 1986.

Some of his books and plays are:
Myth, Literature and the African World (book)

Professor Chinua Achebe was a Nigerian novelist, poet, and critic. His first published novel "Things Fall Apart" is considered his best book. This very book is the most widely read book in Africa even after he passed on. Indeed, his literary influence remains evergreen!!!

It will interest you to know that he won many awards while still active literary and some others posthumously amongst which is "The Man Booker International Prize" in 2007. Most of his books focus on the traditions of Igbo society, the effect of Christian influences, and the clash of Western and traditional African values during and after the colonial era.

Some of his books which are widely read across Africa are:

J.P. Clark is a Nigerian poet and playwright. He also has many drama works. Some of his drama works includes "Song of a Goat, The Boat, and The Raft". His writings have political coloration and criticism.

It will interest you to know that he received the Nigerian National Order of Merit Award for literary excellence in 1991.

Some of his books are listed below:

It will interest you to know that she was awarded a MacArthur Genius Grant in 2008. She has also been awarded many honorary Doctorate degrees in "Doctor of Humane letters" by prestigious universities such as Johns Hopkins University, The University of Edinburgh, and Haverford College.

Some of her books which are widely read across Africa and other parts of the world are:

Posted by Steven Bright at 09:46 No comments:

Getting Started with Book Publishing through Amazon Kindle Direct Publishing

There are some basic things you need to know about book publishing through Amazon Kindle Direct Publishing (KDP) as a Nigerian who is ne... 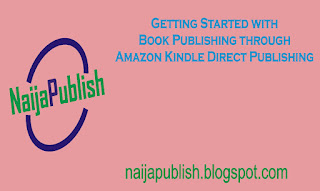